It’s that time of the year again. The 2019 edition of the Women’s World Tour is about to start. Not with “just another race”, no. It does so with the modern classic that Strade Bianche has quickly become. A race everyone is looking forward to, because there’s no other like it on the calendar. No matter the weather looks good like this year or terrible like last year, Strade Bianche means epic racing and that’s something both riders and fans appreciate.

There has been only four editions of the women’s Strade Bianche before. The latest two had some sort of live production and were, arguably, the most memorable as well. Elisa Longo Borghini (who won’t be racing this year due to illness) won in 2017 in a nail bitting finale against Kasia Niewiadoma, catching a late breakaway by Lucinda Brand and Shara Gillow in the uphill streets of Siena. 2018 saw a commanding solo win by Anna van der Breggen under the worst weather conditions ever since the race was born.

Strade Bianche is the race’s name and also the Italian words for ‘white roads’, which is of course what this race is about. These off-road, sterrato sections set it apart and make the hilly parcours even harder, as most of the non asphalted sections are precisely the steepest ones. 8 sections make a total of roughly 30 kilometres of such roads. The icing on the cake is the extraordinarily steep climb towards the finish line in Siena, up to a maximum gradient of 16%.

The profile in the second image shows the final 20 km in detail, which is supposed to be the part that will be shown live on tv.

Even though sunny weather is expected, dry roads don’t necessarily make it any easier. To a certain extent, rain can help level the sterrato and make it somehow smoother. Considering the race as a whole, a wet edition would be of course more demanding, but Strade Bianche is never easy anyway. 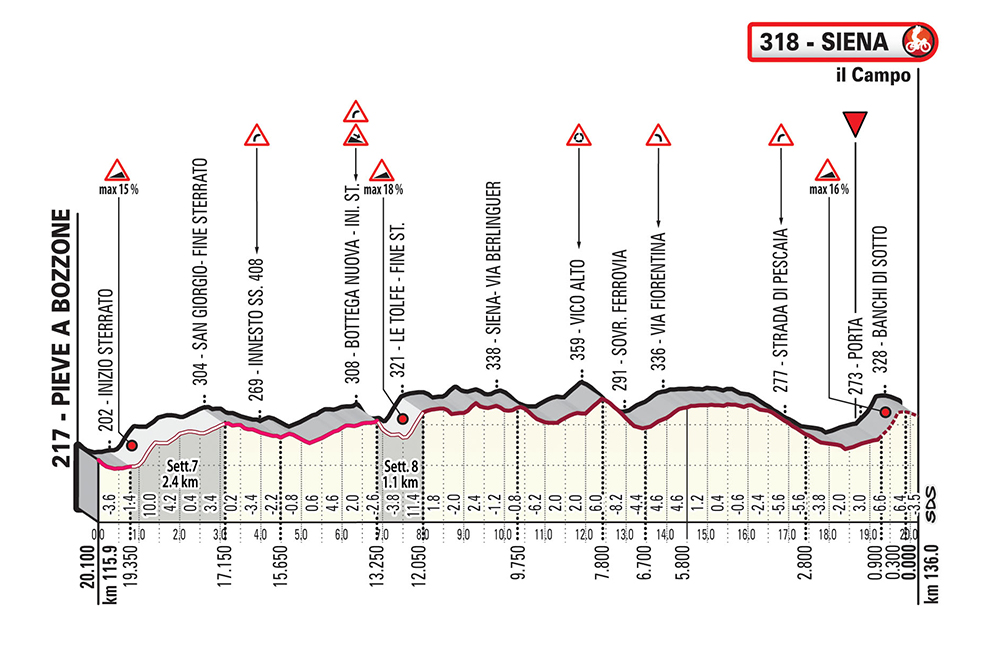 At this time of the season there’s still some lack of good references that give a reliable indication of every rider’s form. But it’s probably fair to mention road world champion Anna van der Breggen (Boels-Dolmans) as the big favourite. The last year’s winner has apparently had a smooth winter and was already among the best last week in Omloop Het Nieuwsblad. As usual, she will be backed by a strong team. Chantal Blaak may lack some climbing skills for this race, but she’s in great form and knows how to take advantage of tactics. And what about MTB star Annika Langvad? She may well be a real dark horse or, at the very least, an excellent domestique for her leader(s).

Kasia Niewiadoma (Canyon//SRAM) has been the runner-up here for three years in a row. Along with her teammates she looked sharp in the Omloop and knows how to perform in this race. Will she be good enough to take the final step to the top? Time will tell.

Then there’s the ‘holy trinity’ of climbers and all-rounders of Mitchelton-Scott. If there was any doubt about the recovery of Annemiek van Vleuten after her bad knee injury last year in Innsbruck, her perfomance in OHN removed them. She’s clearly good enough to be in the mix again. With Lucy Kennedy and Amanda Spratt, the Australian team has three contenders for the win. That’s always a tactical advantage if they play it well.

Ashleigh Moolman-Pasio will be the leader of CCC-Liv. Outstanding in the sort of steep hills that make this race, she can count on the support of Marianne Vos, who’s back on the road after a good cyclocross season. The South African champion will also have to face the opposition of, among others, some former teammates of hers. Cecilie Uttrup Ludwig, now as the undisputed protected rider in Bigla, also knows how to perform here. What about Clara Koppenburg? If she’s able to transfer the climbing prowess shown in Setmana Valenciana to the Tuscan hills, she may be a surprise again.

Lucinda Brand and Janneke Ensing (Sunweb), Soraya Paladin (Alé-Cipollini), Ruth Winder (Trek-Segafredo) and Shara Gillow (FDJ Nouvelle Acquitaine) are also strong outsiders with their smart and aggressive style of racing. And, even though Strade Bianche is not a race for the sprinters, there’s a chance that Marta Bastianelli (Virtu) and Coryn Rivera (Sunweb) survive the hills to fight for the win in Siena.

After two years only on the Player, Strade Bianche will be finally shown live on Eurosport this year. Channel 2, 12:30 CET. It’s expected to finish around 13:15. Same goes for Sporza in Belgium.