Even though the Amstel Gold Race is finally back on the women’s calendar and it’s usually considered as the opening race of the Ardennes week, the first race actually ridden on Ardennes soil is the Flèche Wallonne. In past years it used to be the big highlight of a somewhat uncrowded part of the calendar. Now, with the addition of both Amstel Gold Race and Liège-Bastogne-Liége, it’s perhaps the less anticipated classic of the week. But winning Flèche Wallonne is still an important prize, and so the competition will be fierce. 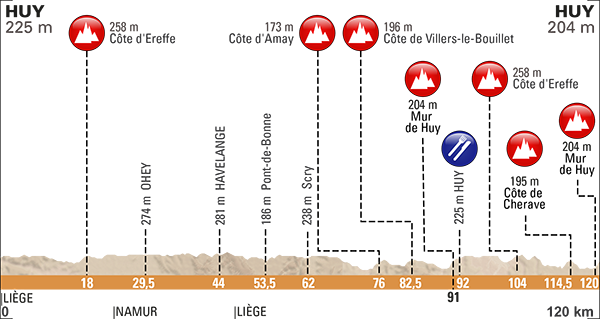 The upcoming edition of the Flèche Wallonne feels a little bit like a watered down version of the 2016 edition of the race, at least on paper. It’s 17 kilometres shorter and it features less climbs. It will still be a hard race, though. First added in 2015, the Côte de Cherave has proved to be a decisive point of the race since that year, as the riders who attacked there were able to reach the infamous Mur de Huy without being caught by the chasers. So expect fireworks before Huy, as some favourites have already said they’ll try to attack earlier.

On paper, two riders stand out above the rest: the winner of the last two editions of Flèche Wallonne and the recent Amstel Gold Race, Anna van der Breggen (Boels-Dolmans), and Kasia Niewiadoma (WM3). Both are great climbers with an aggressive racing style who can perform on these punchy, steep hills. It would be a big surprise if they don’t try something before Huy.

Van der Breggen can also rely on her powerful Boels-Dolmans team as an alternative. Megan Guarnier doesn’t really look in great shape, just coming back from injury, but Lizzie Deignan does.

Annemiek van Vleuten is showing impressive consistency throughout the entire classics season. Huy might be too steep for her, but she knows how to play her cards to get a result. She was 2nd in 2015 thanks to smart tactics. The other option for Orica-Scott could be Katrin Garfoot.

With Elisa Longo Borghini missing the race due to illness, Claudia Lichtenberg will be the leader of Wiggle-High5. Other riders who may fight for the win are Ashleigh Moolman-Pasio (Cervélo-Bigla), 2014’s winner Pauline Ferrand-Prevot (Canyon//SRAM) and her teammate Alena Amialiusik.

After some confusing info, it looks like we’ll have to go back the not-so-good old way of following the races: Twitter. The official hashtag is #FWwomen. Check it out for updates in case some unlikely live stream is announced later.