Not quite Doyenne yet: Liège-Bastogne-Liège preview

The men’s Liège-Bastogne-Liège is known as La Doyenne due to its old age, being one of the oldest classics on the calendar. On the eve of the first ever edition of the women’s LBL we may wonder whether it will ever become a true Doyenne. That would be great. But first let’s see what’s happening on Sunday in the final race of the Ardennes week.

135.5 km doesn’t put Liège-Bastogne-Liège among the longest races of the calendar, but it’s one of the hardest, and certainly the most climber-friendly Spring race. Things start to spice up right after the first half of the course. La Vecquée may not be terribly steep with its 4.9% average gradient, but it’s 6.2 km long and that makes it a much more sustained climbing effort than any other hill from any other classic. It will contribute to the overall attrition before the real fireworks start with La Redoute. 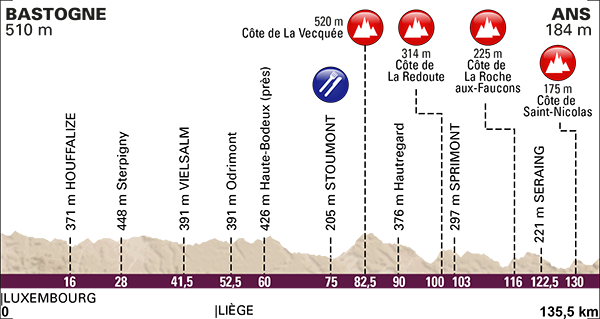 La Redoute is the iconic climb of the race. A 9% average gradient for 2 km is more than enough to make a considerable selection — or even a definitive winning move. If not, there’s still La Roche aux-Faucons and Saint-Nicolas to come. Both are shorter, but even steeper than La Redoute. Not even the finish in Ans is completely flat.

No beating around the bush here. There are five riders who seem to be above the rest here: Kasia Niewiadoma (WM3), Annemiek van Vleuten (Orica-Scott), Elisa Longo Borghini (Wiggle-High5) and of course the Boels-Dolmans duo who’s dominating the Ardennes classics so far: Anna van der Breggen and Lizzie Deignan.

Van der Breggen’s recent attacks have been devastating and she knows how to take advantage of team’s tactics, and Deignan is the fastest for a group sprint. So, how can the others beat Boels?

The hills at Liège-Bastogne-Liège are longer and better suited for true climbers than those of Amstel Gold Race and Flèche Wallonne. That may be good for Niewiadoma and Longo Borghini, as long as the Italian is fully recovered from the illness that made her withdraw from Flèche, and worse for Deignan, who is a punchy and explosive rider, but not exactly a mountain goat.

Van Vleuten is struggling a little bit on the climbs but her endurance and attitude is as good as it gets, she’s looking very confident, and sprints moderately fast in the finish. Van der Breggen can do it all and is looking forward to getting a historic Ardennes hat-trick.

Besides the magnificient five, there are a number of other riders hoping to get a good result. Ashleigh Moolman (Cervélo-Bigla), Shara Gillow (FDJ-Nouvelle Acquitaine-Futuroscope), Pauline Ferrand-Prevot and Alena Amialiusik (Canyon//SRAM), Katrin Garfoot (Orica-Scott), Janneke Ensing (Alé-Cipollini) and Claudia Lichtenberg (Wiggle-High5) are among them.

Unfortunately there won’t be live tv, which is quite disheartening. Follow the race on Twitter with the #LBLwomen hashtag and expect some sort of race highlights after the men’s race on several TV stations, as well as on the UCI Youtube channel later.